I will be attending the Tampa Bay Times Festival of Reading on the St. Pete USF campus along with some of the artists. The first four fables and selected artwork from each will be available for purchase.
We'll have information on the upcoming Audible editions of the fables and on the 5th book scheduled to be released later this year.

We hope to see you there!

www.davidscottlillis.com
Posted by David Scott Lillis at 11:21:00 AM No comments:

With four months left in 2012, we have an ambitious production and show schedule ahead.  September should see the publication of the third and fourth fables (In Shadow's Sea and The Oracle Who Ate Ants) in both print and Kindle editions.  The artwork for the fifth fable should begin development this month as well. We are also hoping to release our first audio title on Audible.com.  Finally we will be gearing up for 4-5 show appearances in the southeast starting in October. Check the links above to read the prologues of the next two fables and below is a peek at some of the illustrations by Candace and Amanda. 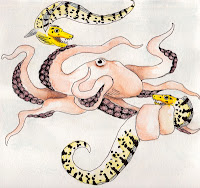 Suah and the Oracle. 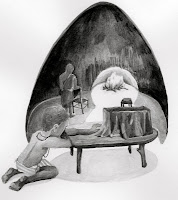 David Scott Lillis
I live on the Gulf Coast of Florida with my wife and our menagerie (including avian, feline and reptile inhabitants). I share my office (and more often than not my desk and chair) with my cat Einstein, who also travels with us when his schedule allows. Photography, board games, wildlife, hiking, physics and mythology are a few of my favorite distractions.